In almost every professional basketball court, hard maple is used as the flooring material to create the distinct, unique look of the court. The wood is durable, stable, and easy to source since it grows so plentifully. This has been the standard for basketball courts since the sport began in the late 1800s. Both NBA/WNBA and college teams have some impressive detailing in their courts. Each team can design their own floors, using methods like installing the wood in specific patterns, staining the wood itself to create pictures, or even incredibly intensive, detailed painting to achieve the impressive logos and images that we see on the courts today. The San Jose State University basketball court is the most well-known for its intensely detailed design. The Spartans’ court is a true reflection of the branding and image that the athletic director was aiming for. Requiring over three months of work, entirely new painting techniques, and costing at least $250,000, the floor is a testament to many schools’ desire for creating a conversation entirely around the court’s appearance itself. The five Spartans depicted show the details of their shields’ patina and their skin texture. The space inside the three-point range is stained darker to add contrast to the light color of the rest of the court. Through a process of having design ideas submitted by JMU fans themselves, the school’s new court was conceptualized by JMU supporter Becky Taylor and incorporates several aspects of the school’s history. The “Duke Dog” appears in both corners of the court, and the maple itself is actually stained in the school’s colors, to give it a more natural look while allowing the lines of the court to remain prominent. The rest of the wood is stained to different shades of brown, keeping it visually interesting throughout, and the signature of James Madison himself appears twice in the design of the court. The Nets have one of the most eye-catching designs in the NBA, despite its lack of flashiness. The court itself is kept simple, however, the wood is installed in a chevron pattern not seen anywhere else in the league, with maple that varies in shades of brown even within the same plank. The baselines of the court have also changed frequently, at one time paying homage to the NYC subway system. The wood was painted with the team name, with the lettering and surrounding space appearing as subway tiles and a mosaic, just like the names of the various MTA stations.

The Charlotte Hornets designed a court specifically for “Classic Night”-themed games during their 2018-2019 season. This design is meant to serve as a throwback to the history of the franchise and its most famous players. The court features the team’s colors integrated into the three-point range and baseline, with a beautifully painted gradient between colors. The key has a honeycomb design painted in, which is minimalistic in comparison to the court’s typical all-over stained wood honeycomb design. The court’s center logo is a 30th-anniversary tribute to the team. The FIU Panthers’ basketball court got a dramatic upgrade in 2013, transforming from a plain, no-frills floor to a literal beach scene. The court brings to life the relaxing Florida lifestyle we all imagine, with palm fronds and rolling waves on the shore depicted in the design. The images were painted onto the wood, layer by later, to ensure proper variations in the shades of blue in the water. It’s the only court that is painted to look like an entirely different scene.

The design of the Boston Celtics’ court is kept simple, but like the Brooklyn Nets’ court, the actual wood used is unique itself. For starters, the Celtics are the only team in the NBA that does not use hard maple for their floors. Instead, the court is made up of red oak. The parquet-style floor is in a sort of checkerboard pattern, with planks put together in squares and then alternating directions. It gives the court an incredibly unique look, especially since the boards vary in tone as well. Their signature green makes up the color of the key and baseline. The Celtics have been using this floor design since the team’s inception, and pieces of the original parquet floor are still used today. The CSUN basketball court is unlike any other in college basketball. The main area of the court is stained a light, slightly warm grey, contrasting with the color of the three-point range area, which has been stained a darker, cooler grey. This darker grey makes up the image of the school’s mascot, the matador, as it surrounds the school’s initials. The impressive use of staining and unique color choice makes CSUN stand out amongst other courts. The key and baseline are painted black, with the “CSUN” in the middle of the court painted a striking red-orange.

THE UNIVERSITY OF OREGON: 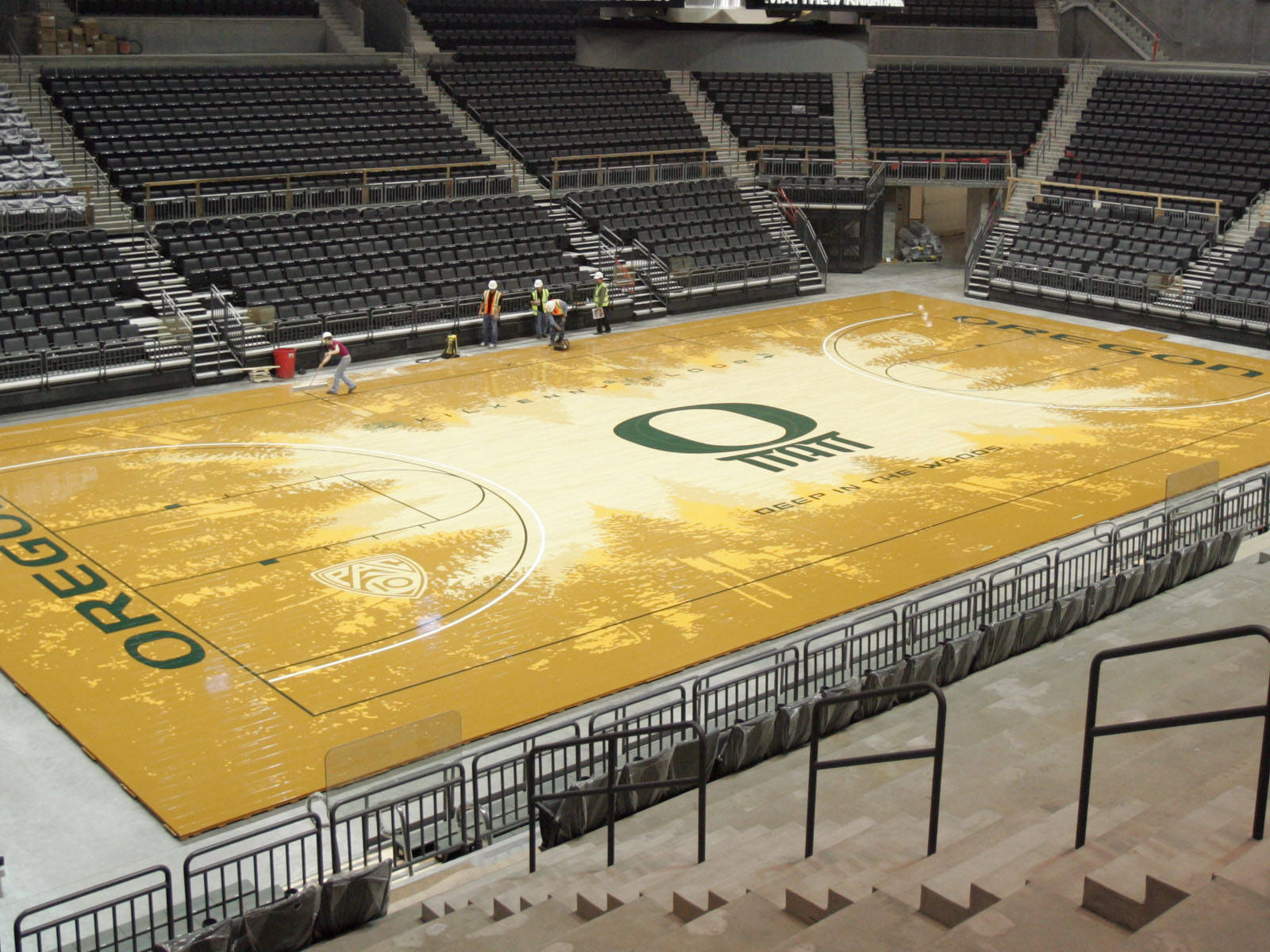 In one of the most distinct basketball courts ever designed, the University of Oregon’s team plays on an actual evergreen forest. The floor, produced by the same team who later painted the San Jose State University court, features a painted stencil of a rugged forest around the perimeter of the court, in three shades of gold to convey depth. The tops of the trees point inward to the school’s logo, which sits on a sand-colored background. It took 2,500 hours of work to complete and appears from above as if you’re looking up into the sky from a clearing in the woods.

Every client of ours brings unique challenges and needs to their hardwood flooring project. Whether it's intricate pattern or border work, or simply a standard installation it's great to see the finished results. Take a look at some of our favorite projects in Philadelphia and NJ below.

Request a quote below and our owner Steve will personally contact you in order to gain a better understanding of your project and provide you a quote.